A New Biological Control Method for the Emerald Ash Borer

An effective biological control tool is now available in Canada

Trois-Rivières, March 29, 2022 – GDG Environment a subsidiary of the Kersia group is proud to announce that it has obtained registration from the Pest Management Regulatory Agency (PMRA) for its product, FraxiProtec™, a new biological control method for the emerald ash borer (EAB).

GDG Environment is particularly pleased to be able to contribute to the promotion of a Canadian scientific discovery.

In 2016, GDG Environment and canadiens researchers took steps to test the effectiveness of a method to control the emerald ash borer, using an auto-dissemination device for the fungus Beauveria bassiana isolate CFL-A called FraxiProtec™. Since 2019GDG Environment has continued its efforts to deepen various research questions related to the efficacy of the fungus, the registration and the development of the FraxiProtec™ label. 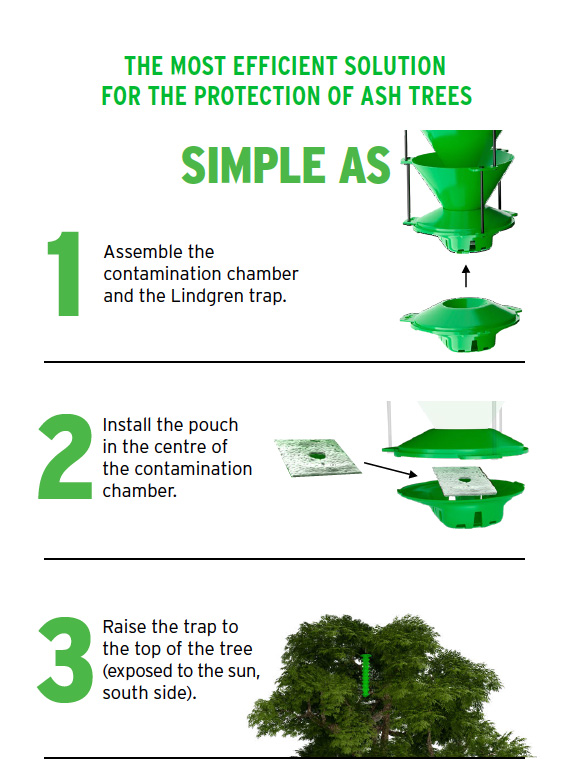 Therefore, due to this beautiful collaboration, we have a new tool in Canada for controlling EAB populations using a naturally occurring fungus from Quebec. Since the EAB is a new insect in our ecosystem, it has few diseases and predators. This invasive exotic pest is rapidly advancing and decimating North American ash populations.

This new auto-dissemination system controls EABs in the adult stage. The insect is attracted by the device, once in contact with the fungus Beauveria bassiana, it is released and free to contaminate and disseminate toxic fungal spores to other EABs during mating.

The installation of the devices is scheduled for early June. It is therefore not too late to tackle this problem. Arborists and other forestry professionals, do not hesitate to let us know your interest by contacting us. GDG Environment will provide technical support for the installation of the FraxiProtec™ traps.

ABOUT THE EMERALD ASH BORER

Originally from Asia, the emerald ash borer first appeared in the United States and Ontario in 2002, and in Quebec in 2008. It would probably have arrived in packaging or wooden pallets during the maritime transport of goods and would have found refuge in forests and cities to then spread through firewood and the exchange of plant material between nurseries. By gradually killing all ash trees, this exotic pest now poses a serious threat to the economy and the environment in urban and forest areas, even becoming a threat to human health.

ABOUT GDG ENVIRONMENT, A SUBSIDIARY OF THE KERSIA GROUP

GDG Environment has been dedicating its expertise to the development of innovative and responsible solutions since 1984. A Canadian leader in the field of biting insect control using biological larvicides, the company now serves many municipalities in Quebec and throughout Eastern Canada. The marketing of the device to fight against the emerald ash borer represents continuity in the mission of the company and its fundamental desire to always better serve its customers.In 2019, GDGbecame a subsidiary of the Kersia group, a world leader in food safety from farm to fork. The Kersia group is a major player and trusted partner in agri-food, industry, hospitality, institutional communities and water purification while providing innovative and value-added solutions in more than 120 countries.

AN INNOVATIVE BIOLOGICAL SOLUTION TO CONTROL EMERALD ASH BORER The solution is deployed through an assisted auto-contamination device comprised of a pouch coated with the active ingredient that is placed in a contamination chamber high up in an affected ash tree.

How to remove a tick

If you have been bitten by a tick and want to know if it carried the infectious agent of Lyme disease, relapsing fever, babesiosis and/or anaplasmosis, we can help you.

Find out about the recommendations and symptoms informed by the Department of Health and Human Services regarding West Nile Virus.

Top 10 tips to reduce the number of mosquitoes at home!