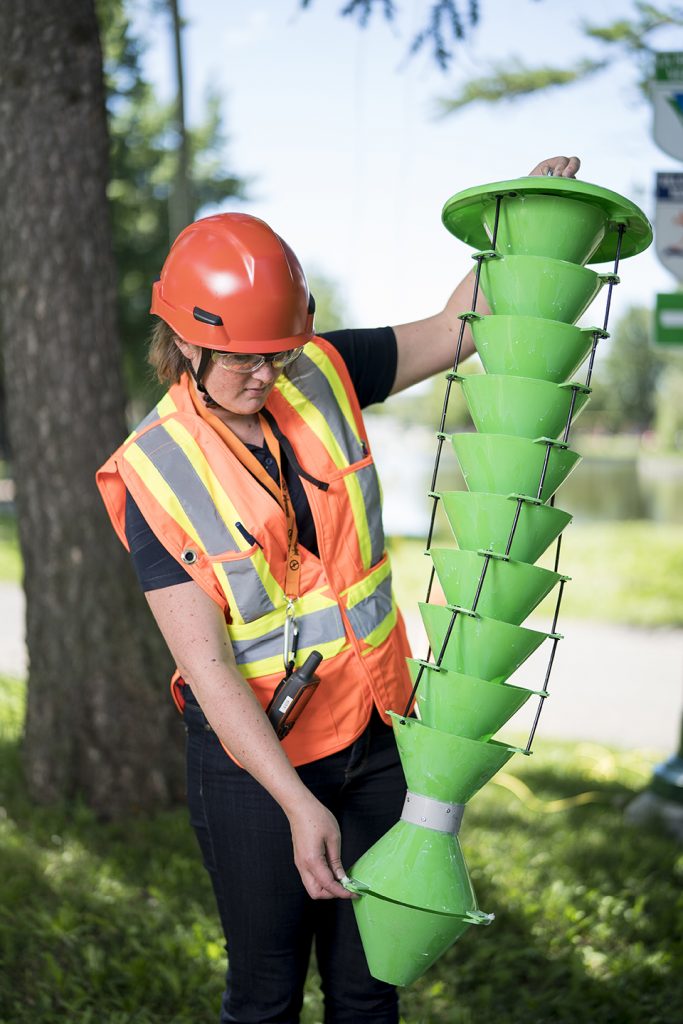 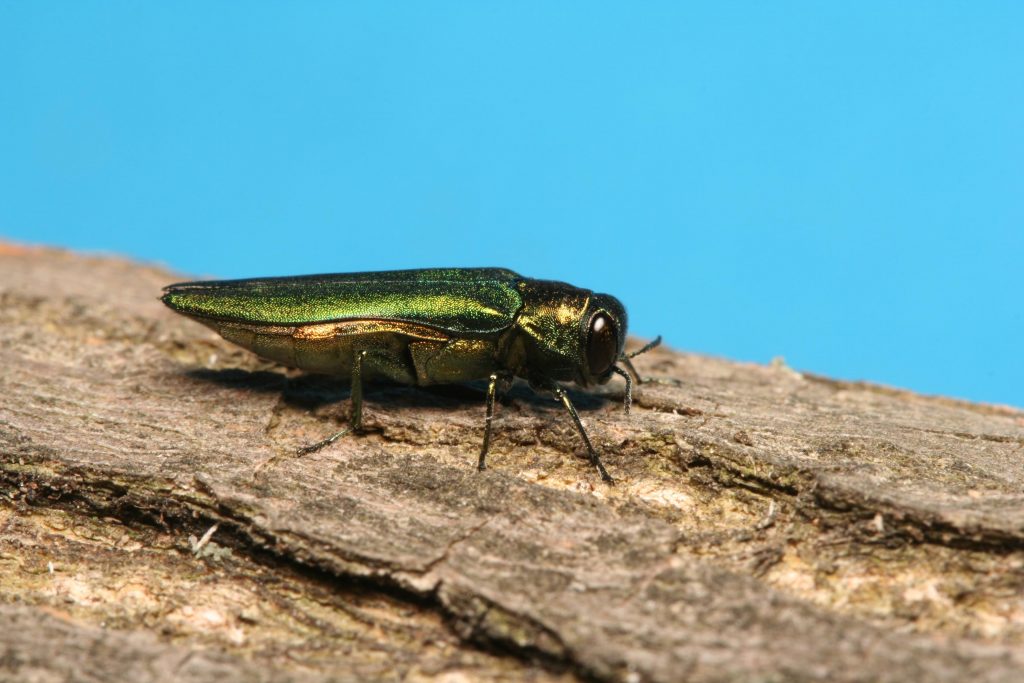 Emerald ash borer is a very destructive exotic pest from Asia that has quickly spread across Quebec. GDG Environment, in partnership with researchers from INRS-Institut Armand-Frappier and Natural Resources Canada, is testing a control method for emerald ash borer using the entopathogenic fungus Beauveria bassiana.

The technique is aimed at protecting ash trees by controlling emerald ash borer populations using FraxiProtecTM, which promotes the autodissemination of the entomopathogenic fungus.

Emerald ash borer is a very destructive invasive pest that can kill a tree within a few years, and all ash
species are vulnerable to it. Because of their hardiness and rapid growth, ash trees are widely used in urban environments, along streets and in parks. Visible signs of emerald ash borer infestation are very hard to detect before the infestation reaches an advanced stage. Once visible signs appear, the pest is often already out of control. So it is important to effectively monitor for emerald ash borer to detect it at the early stages of infestation.

How the program works

A monitoring program was first set up to determine the infestation level on Mount Royal. FraxiProtec™ autodissemination devices and prism traps were installed on 30 ash trees on Mount Royal. The proportion of trapped emerald ash borers infected by the entomopathogenic fungus was assessed on a weekly basis.

Table 1. Number of emerald ash borers captured and infected in 2017, including the change in infestation level due to treatment.

Emerald ash borers are exposed to very few mortality factors once they reach the adult stage. Therefore, autodissemination devices add to the number of mortality factors borers have to deal with. In the absence of this control method, the growth rate of the emerald ash borer population would be very high (Figure 1A), which means it would reach epidemic levels within a few years. Introducing a fungus as a mortality factor targeting adults has a strong impact on the insect’s growth rate because it reduces the number of females and therefore the number of eggs laid to produce the subsequent generation (Figure 1B) and eventually results in a near zero rate of population growth (Figure 1C). 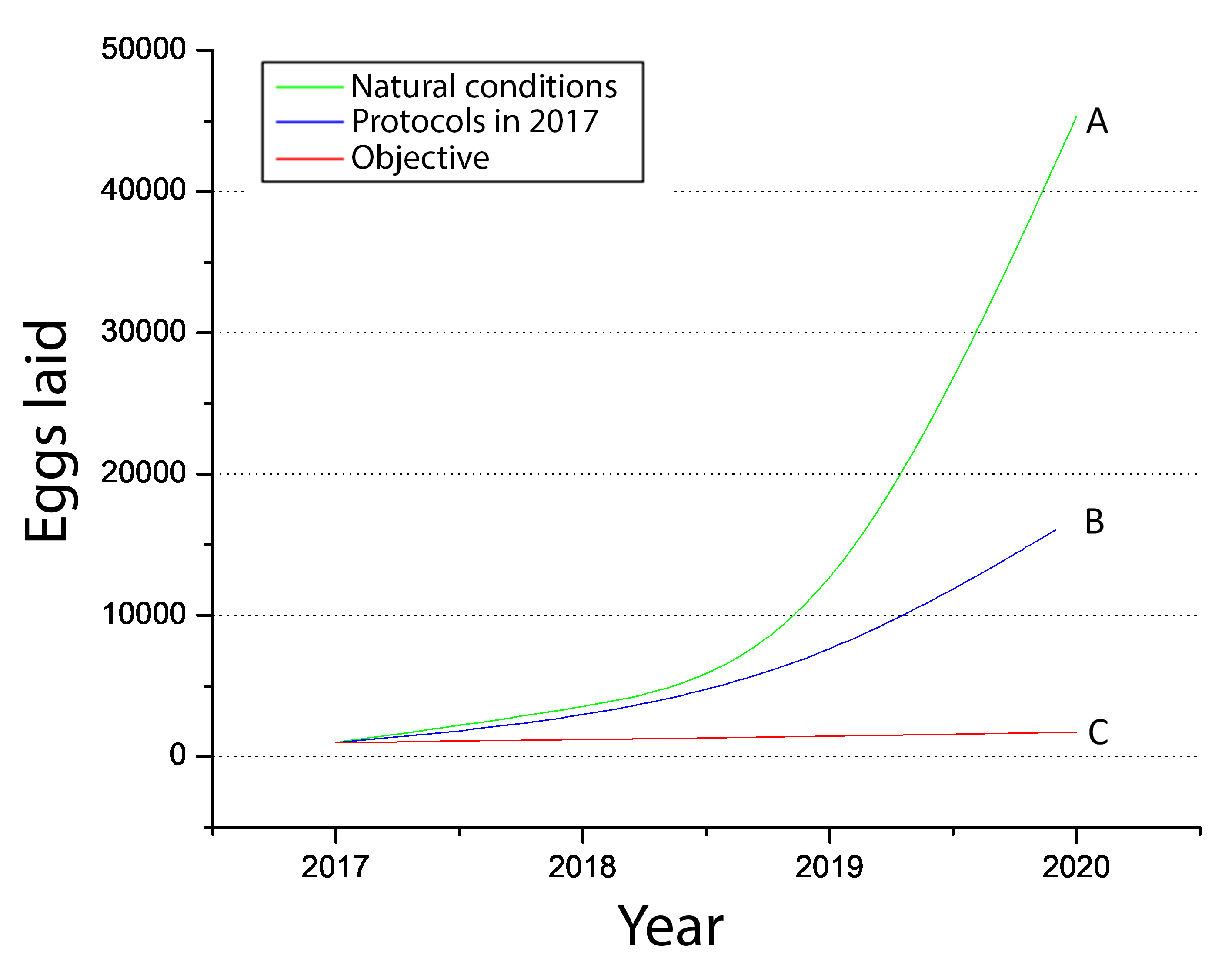